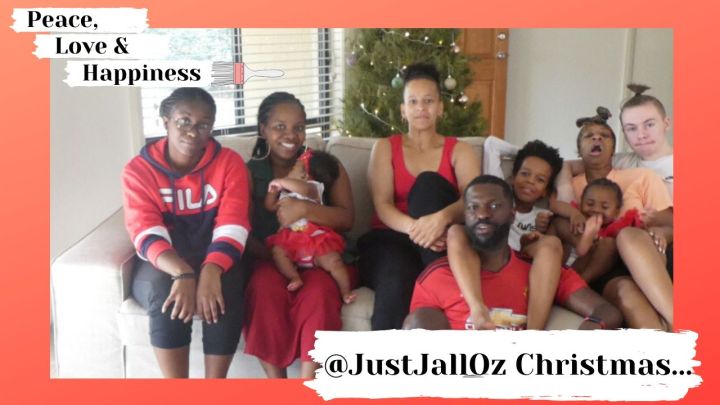 “Happiness is having a large, loving, caring, close-knit family in another city.”

Following a question from our son, in June, we knew Christmas was going to be significantly different this year. As he played on his Nintendo Switch, he glanced over the screen and said, “Is it nearly Christmas, yet?” The dark evenings were clearly giving him that familiar Christmas hug he already had seven months early. Those evenings that make you want to snuggle up with a hot drink, light a seasonal scented candle and settle down with a movie and some snacks. Unfortunately, this year, there was going to be no snow or rain, so our brains were trying to adjust.

After we signed the leases for Casa Del Jalloh, in Canberra, we decided pretty early on that we wanted our first Christmas in Australia to be at home and the hope was that all of the Jallohs of Brisbane could come and join us. However, this was not possible for several reasons. Ahmed’s mum was travelling to Africa on missionary work. His dad and brother-in-law only had two days off work, so a trip from Brisbane to Canberra was not an option, this year. However, all was not lost. We had managed to persuade his two sisters and nieces to visit for three weeks over Christmas.

As we sat talking one evening, we realised three things. 1. This was the first Christmas he had spent with his youngest sister. 2 – We had only met his nieces this year, February, even though it felt like we’ve been around her, forever. 3 – Ahmed had NEVER spent a Christmas with all his siblings in the same house. It was phenomenal to see Ahmed so happy with his family around him.

The aim is to have the WHOLE family together in Brisbane for Christmas… #AUS2020.

My expectations of an Australia Christmas were surpassed. At first, we were very sceptical of the lack of snow, cuddly weather and cheesy Christmas movies that frequented our TVs each year. The run-up to Christmas was filled with the usual festive activities; shopping, eating, laughing, drinking (Lemon and Lime Bitters), purchasing the tree, decorating the tree and all this in weather 37 – 41 degrees and a Christmas Eve Church service thrown in for good measure.

Our son really enjoyed having other children around to play with, especially in the pool. I think between him and Ahmed’s niece, they asked about 10-15 times a day if ‘today was a pool day’. We baked cup cakes, cookies and banana muffins, had a couple of BBQ’s and spent some real quality time together.

I am also really proud that Ahmed and I both kept up with our gym schedule and attended our usual 3-4 sessions a week. On days we didn’t go to the gym, we went on a walk for a minimum of 60 minutes. We attend Orange Theory gym and find the coaches energy, knowledge and passion contagious. The whole ‘working out as a group’ thing has really stuck for us; so much so we are doing the 10pm class on New Years Eve with our daughter and her boyfriend. If we are not too tired, Ahmed and I might nip home for a quick shower and head out to a bar for a few drinks afterwards. You will have to check out our New Years Eve blog to find out what we decided to do…

Exercise is such an import part of our lifestyle. We did our best to keep fit back in the UK but having more time on our hands, now, means we can dedicate effort being physically and mentally healthy.

Laughter and music filled the house. Christmas day began slowly in the Jalloh household. The grown-ups and ‘teenagers’ emerged from their pits and incited a slight stir. As I wrote this, I felt a frown sneak across my forehead, surely it should be the little kiddies up, causing a ruckus. It should be them excited for the big day. Well, J Boy was pretty wild as he bounded around the kitchen like Tigger from Winnie the Pooh.

After we ALL got up, washed and dressed, we had breakfast together, then migrated from the kitchen into the living room to begin a new tradition. Every Christmas morning, from now on, we will take a family photo (or 11) to look back in 5, 10, 15 years and see how we have ALL changed; how the family has evolved.

Yes, best Christmas ever!” said Ahmed’s youngest sister and I smiled as I looked back over the photographs of a “wonderful Christmas time…”. Thinking about how hard it is to get a group of people to sit still, look at the camera and smile at the same time. Also, Ahmed decided today was the day to show everyone how he linked the camera to his phone. This was then followed by lots of “I was not looking”, and “turn the baby forward”, which just added to the mayhem and fun.

We watched a few Christmas movies, ate bucket loads of food, had a lot of laughs, opened presents, had a swim in our tiny pool, had a BBQ and simply enjoyed one another’s company.

Enjoy the gallery below and tell us about what you got for Christmas.

Thank you for all your love and support throughout 2019. We will be back, bigger and better in 2020.

Please take the time to share this Christmas miracle with today’s Mystery Link.

As always, thank you for keeping up with the Jallohs in OZ.

Can you find the secret word hidden in this post?

This site uses Akismet to reduce spam. Learn how your comment data is processed.