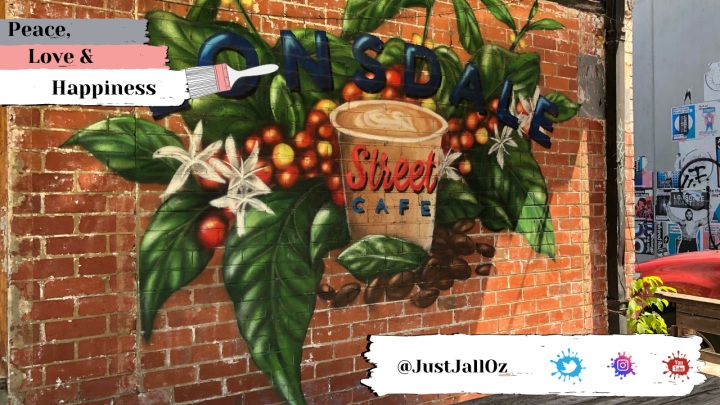 How many of our food adventures seem to start off with us being undecided?

Hey Beautiful people, welcome back to the Jalloh family blog. Today, we will telling you all about a great cafe/ restaurant we recently discovered. But before we get into it, if you are new to our blog and enjoy our posts, don’t forget to leave a comment on a post you like and follow us for more Jalloh family content.

Everyone was up at a good hour and we were due to do some food shopping, so there was only one real option available… BRUNCH! We decided to head to the civic centre to see what we could find.

We ended up in Braddon (as usual) because there are some pretty good spots around there that serve vegan food. Ahmed was a little bit anxious. Sweet Bones is located in Braddon and we all know what Ahmed thinks about the food at that establishment. The spot we were due to go to was next door to Sweet Bones and super bus. They had no seats available, so we continued our search. Braddon has a parade of cafes and restaurants so it was easy to find an alternative place to go, however, it was difficult to decide which one was right for us. After walking around the circuit, twice, we came across Lonsdale Street Cafe. We were not disappointed. We sat outside to enjoy the morning sun which was creeping over head. As I said in the post before, Braddon is not great for parking, however, there is parking in the civic centre, which is a 5 to 10 minutes walk from Cafe Parade (that’s what we’re calling it now).

We arrived around 11.15 so we had the choice of the breakfast menu or the all day menu that started at 11.30. They had a fair amount of vegan and non vegan food options on the menu.

The vibe was very relaxed and chilled, it had inside and outside seating options available. There were more people sitting outside as it was a sunny (but quite windy) day. We sat on the wooden tables and chairs and I got a few ‘pricks’ on my butt, I would not go as far as to say splinters though. The place was filled with middle aged people and older. Some with their dogs and others with their bikes, so we were entertained by the interactions between the people and their pets. There were plenty of people walking by visiting the neighbouring establishments too and there was a race for charity event happening not too far from there so I imagined there were extra people, with their numbered vests, walking by that day.

Ahmed and I both opted for the breakfast menu; Ahmed chose the sour dough bread, Avocado, grilled tomato’s and hash browns, whilst I had Gluten Free toast, spinach and grilled tomato’s. We both agreed that it would have been topped off beautifully if baked beans were available. But overall the meal was nice. J boy decided on the kids nuggets and chips with a vanilla thick shake. He said the meal was 10/10 and so was the thick shake.

Our daughter and her boyfriend both opted for the lunch menu. D (our daughter’s boyfriend) opted for the chilli-dog and boy was it a beast. Our daughter opted for the Lonsdale burger which came with shoestring fries. Their eyes were bigger than their bellies and they were unable to eat it all; but they gave it a good shot.

All the ‘kids’ opted for thick shakes, both my kids went for vanilla thick shakes and D went for the coffee thick shake. They were clearly made with ice-cream. Ice-cream? In the morning? Clearly, this was a weekend treat. Ahmed went for the Ginger beer in a ‘posh’ bottle and I went for… you guessed it… tea. Green Tea. It came out in a spaceship looking pot and glass mug. As is usual in restaurants in Australia, there is table water available often lemon infused.

The service was good, it aligned with the layed back vibe of the place and was polite, engaging and humorous. Those working in the restaurant were al pretty young, ‘hip’ and engaging which made the dining experience a nice one.

The drinks came out first and within a timely manner the food started coming out. The only improvement I can see in regards to service was for all the food to come out at the same time. There were quite a few gaps with people food coming out which meant were all eating at different times. This was not the end of the world and I suppose it means that we were getting food fresh, when it was available and food that had not sat under a heat lamp or on a hot plate.

Overall rating: The overall rating we would give Lonsdale Street Café is 8/10. We would go back for sure, but Sweet Bones would be our preference when in Braddon; well mine anyway.

This site uses Akismet to reduce spam. Learn how your comment data is processed.

What are you doing to brighten up your surroundings?
Only 3 sets of PJS this year...
What is happiness, to you?
Garden lovely
Eggs in a garden! 🥚 papa chicken hatches
Make memories for them to remember
Loading Comments...
%d bloggers like this: